5 Ways to Keep from Losing Yourself in Motherhood

My first baby was born on May 7th, 2010. Hudson James was 10lbs of chunk and perfection. That means that I have been a mother for upwards of 7 years, and that entire time I was either pregnant or nursing. It wasn’t necessarily on purpose, but every time I’d wean a child, I’d end up pregnant. In the past 7 years, we have done the newborn phase four times, the toddler phase four times, and now the two’s four times. This overlapped with the threenager phase and the fantastic four’s which we’re about to go through for our third time.

I think we immerse ourselves so completely in motherhood that we almost forget who we were pre-kids. Whether you’ve been a mother for three months, three years or three decades, your former life seems like a distant memory; a dream. I think the act of throwing ourselves head first into motherhood is completely crazy – not because it’s not worth it, but because we have no idea what we’re getting ourselves into. It’s an act of bravery. It’s beautiful, terrifying and complex. We literally dive into the deep end with very few resources – no life jacket, instruction manual or white flag. We come up for air every so often, but not nearly as often as we should, and if we’re not careful this could cause crazy harm. So what do we do about it? How do we keep ourselves from losing ourselves in motherhood?

Keep dating your spouse. I adore my husband. He’s a great partner and teammate, but also a great friend and romancer. However, there have been seasons when I have just seen him as an extra pair of hands to help – to take the baby, to play catch with the kids, to wash the dishes, to fold laundry. I don’t think this is bad for a season because there are phases when we just need to do what we need to for survival. But I don’t think that we could have survived that crazy season without keeping date night a priority. We aren’t always good at going out regularly, but when things are tough, it’s particularly important to see your partner as the person that you married, and not just the other parent. (Tip: Arrange a date night swap with friends. We do this every week. On Saturday Seth or I will go to our friend’s apartment to listen out for their kids once they’re in bed. The next Saturday Mark or Phoebe will come over to ours to listen out for our kids once they are in bed. You kill two birds with one stone – you save money and you don’t have to go through the hassle of finding a reliable sitter.)

Find a creative outlet. This is something that took time for me to figure out. I’ve always known that I was a creative person, but after having kids I wasn’t quite sure how that creativity was going to work itself out in real life. So what did I do? I tried something new. I took a step. I bought a few canvases and borrowed some paints and brushes from a friend. I’m going to go ahead and give myself an A for effort, but in all honesty it didn’t go well. Hey, at least I tried. But through trying I also came to a realization; there’s some kind of disconnect between my brain and the brush. I can visualize something amazing in my head, but on canvas, it doesn’t even come close. However, writing is a different story. Words come more naturally than artistic composition. So try something. Anything. Is there one particular thing that keeps you thinking, “I’d really love to try that”. Do it. You might completely flop or you might be amazing. You’ll never know until you try it.

Keep your brain on it’s toes. There are a variety of ways to do this. Games, knitting, apps, puzzles. Personally, I got to a point in motherhood where I felt like I had lost a significant portion of my vocabulary. I had spent the better portion of 6 years helping my boys to understand their world by simplifying things for them. Somehow in that process, the more complex words that I used to include in my sentences on the daily had become locked away in the deep recesses of my mind. I would be in conversation with friends, store cashiers or the husband and draw a complete blank, searching for the appropriate words to articulate my feelings but coming up with nada. For the longest time, I didn’t read – I didn’t feel like I had the time to, and I also had trouble finding a book that I couldn’t put down. Now, I have I’ve found quite a few that I enjoy and have also made the effort to switch Netflix for reading a couple of nights a week. This is slowly helping me to get my smarts back.

Exercise. As Elle Woods once said, “Exercise gives you endorphins; endorphins make you happy. Happy people just don’t shoot their husbands”. Exactly Elle. Exactly. Endorphins also keep you from screaming into a pillow after you’ve asked your kids for the twelfth time to, “put your shoes on your feet!”. Find a gym with childcare and start walking on the treadmill while listening to your fave tunes. Maybe you’ll run eventually (maybe not), but at least you’re spending a hot minute by yourself, while someone else tends to your kids.

Do something for yourself. Whether you feel like it’s seen or not, you’re working hard, day in and day out with little to no reward. You get up early and stay up late packing lunches, meeting deadlines, doing laundry, and loading dishwashers. Most things that you do are for someone else (whether it’s your husband, your kids or your boss), so every once in a while you need to treat yourself to something that you enjoy. Maybe it’s spending time with your friends over dinner. Maybe it’s a mani/pedi. Maybe it’s getting out by yourself and going for a hike or spending time at the beach. Maybe it’s a massage. Maybe it’s getting lost in a museum by yourself. Whatever it is, carve out some time and do something for you. It’s not selfish, it’s necessary.

What about you? How do you keep yourself from falling completely into motherhood? When Your Mini Can’t Poop 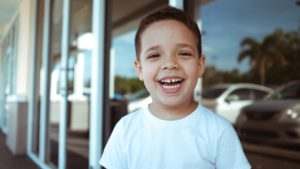